In recent years, the trend for the open floor plan office has been brought on by trendy Silicon-Valley-style startups and creative companies who want to distance themselves from the traditional corporate workplace. The method for office furniture arrangement has since been adopted by companies of all types and sizes, for various reasons. While some may argue that the open plan office is good for flat organizations with little hierarchy, or team-oriented companies that work on collaboration, we need to take a look at if the open office trend is actually bad for productivity.

Why an open plan office?

So how did open floor plans come about, and why did they catch on so quickly? With a large part of the job force now containing millennials, companies are having to adapt to the wants and needs of those who are filling up their positions. With millennials comes the need for transparency, openness, casualness and an appealing work environment. The open plan offices attempts to check all those boxes, and soon even non-millennials were appreciating the thought of the extra room to stretch when those cubicle walls would be taken down.

But what happened when the open floor plans actually went into practice? Did they live up to expectations of what would happen when employees felt they had achieved transparency, openness, casualness and an appealing work environment. Well, yes and no.

On one hand, open plan offices did become appealing to prospective employees, and became a hallmark of a “cool” office, or a desirable place to work. Employees felt more like a team, and that they had a direct line of access to superiors in a way that made the top-down relationships at work less intimidating, and more friendly.

But think about this: in a world with instant access to information and when people have dozens, if not hundreds of apps on the smartphones in the palms of their hands, it can be difficult to stay task-focused, particularly when a work assignment is considered tedious or mundane. Add in the visual and auditory distractions that accompany sitting openly amongst colleagues, and it’s not hard to imagine that staying task-focused becomes even more challenging, affecting productivity negatively.

Once upon a time, cubicles acted like a large, physical “do not disturb sign,” where a worker could hunker down and chip away at the task at hand. But with open floor plans, colleagues can walk up to you to ask a question or begin a discussion without so much as a knock on the door. What can be even worse, is when a colleague strikes up a conversation with someone next to, or near you. Then you aren’t involved in the conversation, but the conversation itself becomes distracting, thus inadvertently putting a dampener on your own productivity. 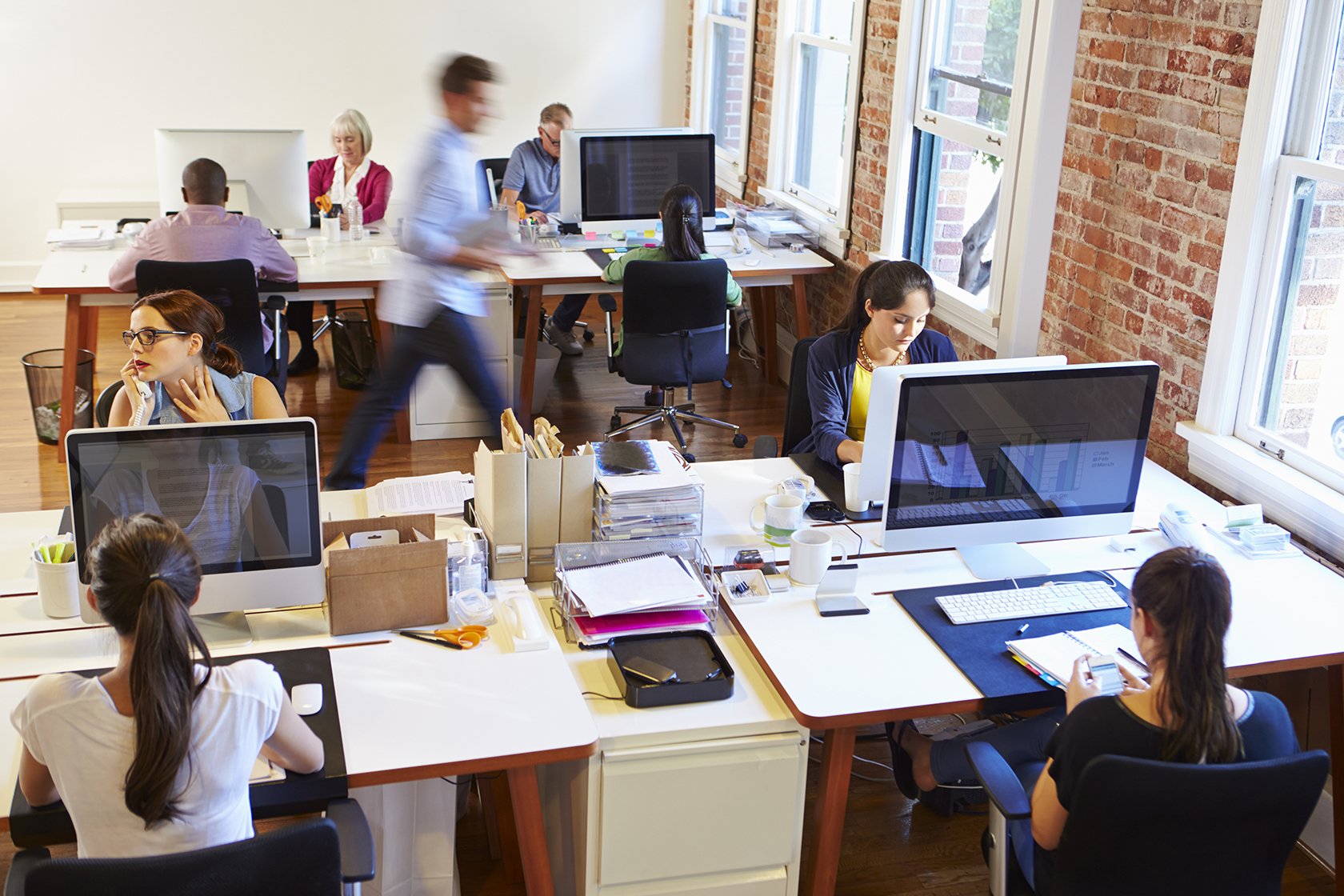 Who can open floor plans work for?

While open floor plans actually harm productivity for larger companies where employees work independently, they can, in fact, be useful in some cases. Companies that are heavily reliant on collaboration and team projects can benefit from the physical openness, which can lead to increased communication, idea sharing, brainstorming, and group problem solving. The key for these types of companies is to ensure that the communication is staying focused on task-relevant topics, which can easily run off the rails when many people and personalities are involved.

When all is said and done, open plan offices are great in theory, but can be harmful in practice. It’s up to you to decide what the costs versus benefits are for your company, or start looking to the other trends in work environment set ups.

Dive into the world of design, productivity and culture that represents the modern workplace.

These Stories on Workplace design

The rise of the hybrid workplace

Activity-based working vs. hot desking: Which setup should you choose?

Everything your business needs to know about activity-based work

Let us know what you think!